Prominent or protruding ears can cause men and boys to be self-conscious about their appearance and overshadow their other more positive features. A solution to this problem is Otoplasty, sometimes referred to as "ear pinning" which can alter the ear size, shape and position to make the ears more proportional to the face and set them to lay flatter against the head. The end result of correcting this condition is to bring balance to the patient's overall appearance.

By the time we are 3 years old, 90% of our ear growth is complete. At any point after this, the need for ear pinning may be assessed. While Otoplasty is commonly performed during childhood, many adults benefit from this procedure as well. In fact, corrective ear surgery was the fifth most popular cosmetic surgery among males in 2013, According to the American Society for Aesthetic Plastic Surgery.

Boys seem to have their ears fixed more often than girls, perhaps because it is more obvious due to shorter-cropped hair. Young men will often tire of having their prominent ears affect their lifestyle and appearance. Some may regularly wear baseball caps to conceal their ears and don't want to continue being locked into this practice. They may want to be able to wear their hair shorter without being self conscious about their ears.

Who is a Good Candidate for Male Ear Corrective Surgery

Boys over the age of four to five are the most common candidates for corrective ear surgery. The ears are pretty much completely grown by this age.

Teasing about their imperfect ears is a very common motivation for boys to undergo this surgery. Having the procedure done at a young age helps to limit the peer ridicule and the psychological trauma associated with it. This teasing can diminish a boy's confidence, and that lack of confidence often carries over into manhood.

However, there isn't an age limit to having the otoplasty procedure. Teens or men of any age, as long as they are in good health, can be good candidates. 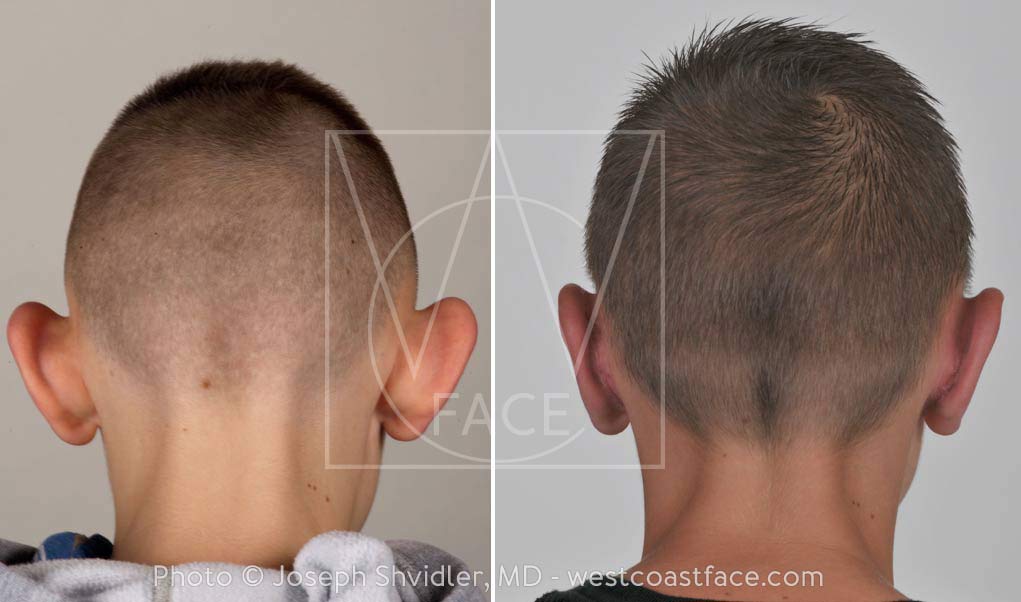 About Blepharoplasty for Men

The eyes are the window of the soul.
Traditional Proverb

Your eyes are one of many elements of yourself that make you unique. But there is something special about the eyes; even a subtle difference in the eyes can change one’s appearance a great deal. For most of us, our brains are wired to pick up on expressions and cues from someone’s eyes. As men age, their eyes and especially the eyelids are often the first feature to show the age. For some men, the upper eyelids develop hanging skin and the lower lids may build up fatty bags, making them look old and tired, or possibly stern or angered. Blepharoplasty (eyelid surgery) is the procedure which effectively corrects these age-related changes in the eyelids and helps achieve a more youthful and alert appearance.

Because subtle changes in the eyes are so noticeable, blepharoplasty is a surgery of millimeters. Done correctly it can take years off of a man’s appearance, because the eyes look youthful, rested, and more attractive.

Male blepharoplasty (eyelid surgery for men) is growing in popularity for men. That’s because removing the excess skin and fatty tissue of droopy eyelids has such a substantial impact on a man’s appearance. By removing excess skin and lifting and tightening remaining skin, an eyelid lift can make the eyes look larger and more vibrant and restore a sharp, well-rested appearance to the upper face.

A lower eyelid lift is a solution to reduce the appearance of drooping and puffiness below the eye or under-eye bags. This surgery is best at addressing herniated lower eyelid fat. Whether the bags under your eyes is caused by herniated orbital fat is an essential question which requires a personal consultation with Dr. Shvidler to answer. 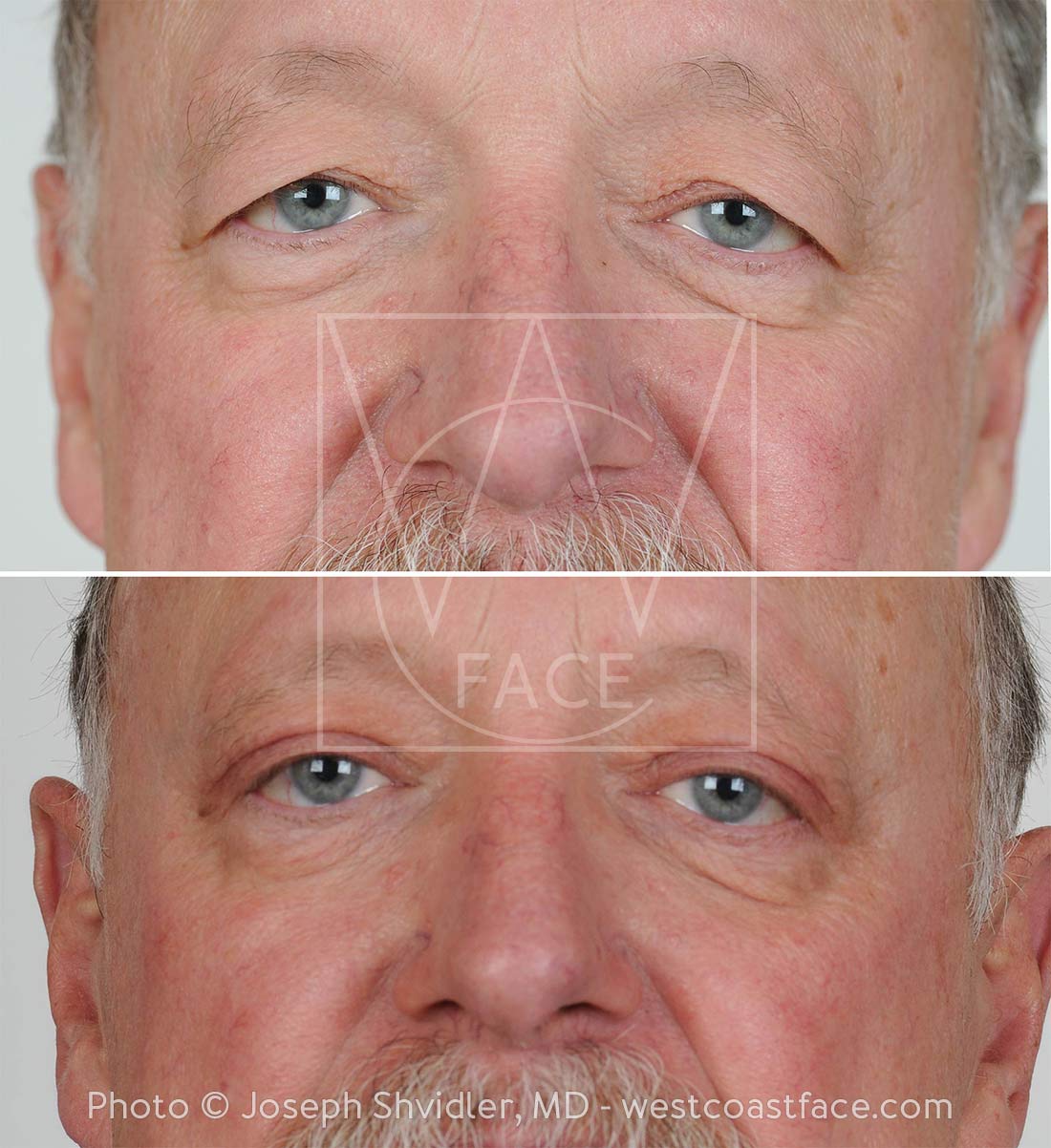 Blepharoplasty is not the solution for everyone. The ideal candidate should be in good health and have reasonable expectations for the procedure.

Men who have wrinkled upper or lower eyelid skin, drooping or excessive sagging of the eyelids could benefit from a blepharoplasty procedure. Common concerns that can be addressed with an eyelid lift include:

Because the skin around the eye heals quickly, your recovery should be relatively comfortable, The dissolving sutures also promote smooth healing. Oral pain medication can be prescribed to help you manage any discomfort. There will probably be some swelling and bruising during the initial recovery period but it will most likely be minimal. Wearing sunglasses can nicely hide these very temporary problems. You can gently apply a cold compress to help the healing process. Within a few days, most patients can return to normal, non-strenuous activity within a few days and return to work return to work in 5 to 7 days.

Wrinkles Around Eyes - Botox® for Men

As a man ages, the years of contracting facial muscles (smiling, frowning, furrowing the brow) will leave an impression. Facial lines will often develop in the forehead (rown furrow and forehead creases) and crow's feet around the eyes. This is one aspect of aging that can make a man look tired and older, or might make him look angry.

BOTOX® cosmetic treatments can prevent those lines from deepening as as possibly erasing these signs of aging, leaving the male patient with a younger and more refreshed looking face.

Botox is Trending for Men

BOTOX is well known as one of the most popular cosmetic procedures in the United States. That's partly because it is so quick and simple, the procedure can be done during a lunchtime with little discomfort and no downtime. This makes it a good fit for men who want to look younger and less stressed without people recognizing that they had anything done.

Botox can work well for men because it is temporary and they can control how much they change their look. And it can specifically target some facial lines and leave others alone. For example, a man may want to leave the smile lines and instead focus on the crow’s feet lines at the corners of the eyes. Another strategy with Botox may be to use it carefully around the brow, so the brows are not pulled upward, which would create an arch in the brows. Men generally want to keep their brows straighter than women. Men will want to avoid overdoing Botox and creating facial paralysis. With carefully targeted and controlled amounts of Botox, facial muscles are relaxed, but not asleep, creating a more natural look.

All features of the face are important, but the nose has the distinction of being a 3 dimensional, sculptural element right in the middle of the face. Needless to say it creates a big impression. A well shaped nose doesn't draw attention to itself, it rests in quiet harmony with the rest of the facial features. But in reality, many of us do not have terrific noses. For a guy, the nose may have been damaged and is no longer straight. Or it may lack a strong and masculine profile. It may not feel in balance with the rest of the facial features. If your nose is a concern for you, then Rhinoplasty, or nose reshaping surgery, may be able to improve its shape.

Why Do So Many Men Have a Nose Job?

Among men, Elective Rhinoplasty is the number 1 plastic surgery procedure. Why is it so popular with men these days? Not all guys have the same motivation, there are several possible factors:

Some men think that Rhinoplasty can only make your nose smaller, but it can be made larger if desired. It is possible to use cartilage harvested from your ear or rib to add to the structure of your nose. 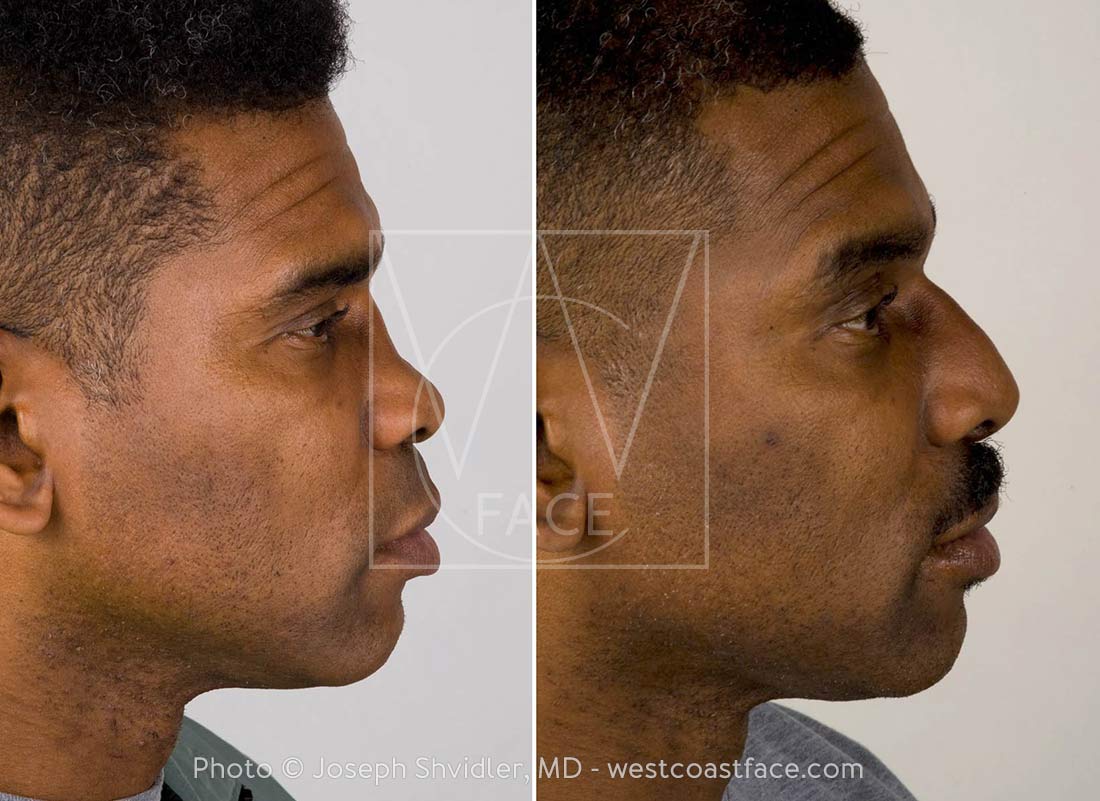 Dr. Shvidler will discuss your concerns about your nose and the best approach to address them, to ensure that after your surgery, your nose is looking like a more refined version of you.

There are differences between males and females in the anatomy of the nose that affect Joseph Shvidler MD's approach to rhinoplasty. But in addition to the anatomical differences, there are gender-based aesthetic goals which should be considered for this surgery. These aesthetic goals are defined by the conventional anatomical tendencies which occur in the general population, as well as social conventions in regards to what is appealing.

Women's noses tend to be shorter and more delicate than men. Of course there is a good deal of variation of nose sizes and shapes among women, and their ethnicity will often affect this, but it is a general tendency between men and women. Another common aspect of the female nose is a subtle upward angle at the tip, called a “supratip break”, which is typically seen as a more feminine facial feature. However, preferred aesthetics change because culture changes and today’s ideal female nose tends to be longer, straighter, more natural look with a slight dorsal hump.

The ideal for the male nose is that it is larger and distinctive, often wider and higher at the bridge, compared to a female nose. Men's noses are usually longer overall with a thicker and denser nasal structure. The tip of the male nose is also generally less rotated, with an approximate 90 degree angle between the upper lip and the tip of the nose.

Successful Male Rhinoplasty should not be overdone or feminized, it should be more attractive and look natural. The nose will be improved in form (appearance), structure (for strength and longevity), and function (preserving or enhancing proper breathing). The nose should be in balance with the patient's other facial features, complementing their eyes, cheekbones and smile.