What is the nasal valve?

The nasal valves are located in the mid to lower part of the nose. This is the narrowest part of the airway passage leading from the nose to the throat, where air then enters the lungs. The nasal passage is narrowed for a good reason. It provides resistance which allows you to control your airflow as well as providing the sensation of breathing in and out (there is a satisfying feeling when you are able breathe in deeply through your nose, and you can feel the air flowing in). Also, if you’ve ever been in extremely cold weather, you would have been aware of how important it was to have your breath warmed and humidified. Breathing freezing and extremely dry air into your lungs from your open mouth is not fun. So a narrow passage into your lungs turns out to be very important.

What is nasal valve collapse?

Sometimes the nasal passage does its work of limiting airflow too well. The consequence is a limitation to breathing through the nose, which can have negative consequences depending on the severity of the condition.

Nasal valve collapse is the term that refers to a further narrowing of the nasal valve from where it should be. This creates increased resistance when breathing, and causes a variety of problems such as the feeling of a stuffy nose all the time, breathing from your mouth, snoring, and not getting a good night of sleep because of this. 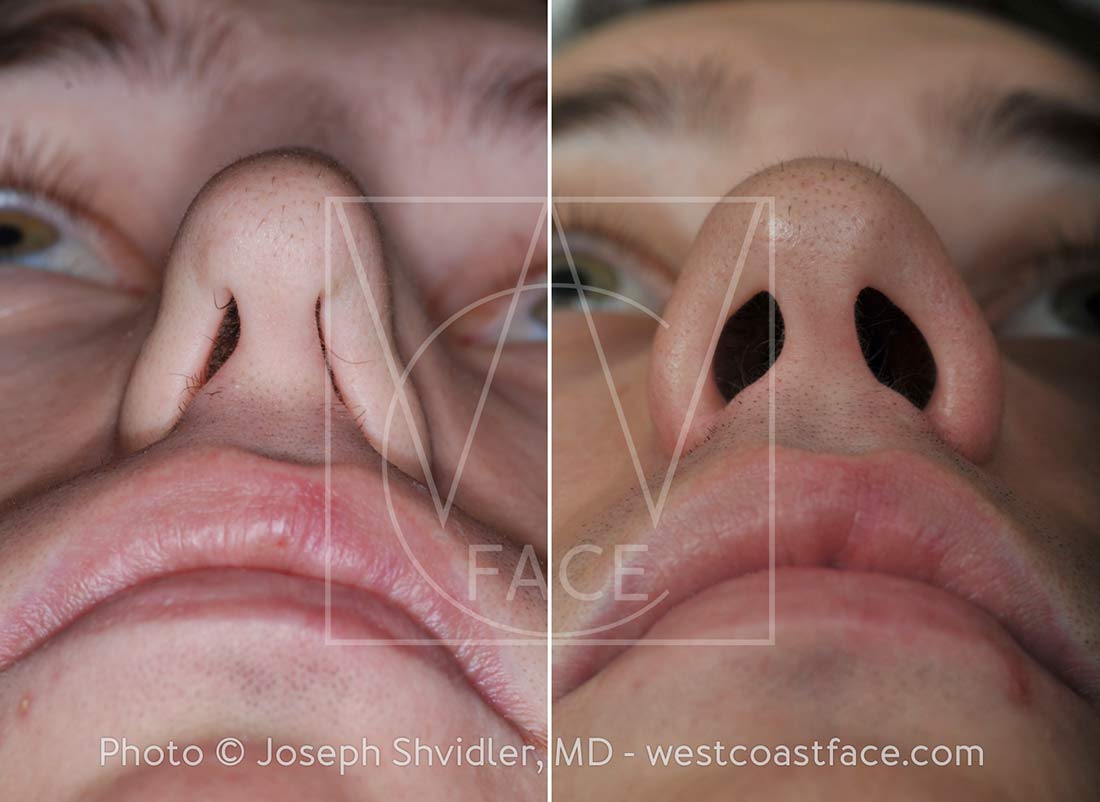 Before (inhaling to show problem) – After

The structures of the nasal valve are created mostly from cartilage, a thin sheaf of muscle and skin. This delicate structure is susceptible to failure from several potential causes. Sometimes there is a combination of causes involved to create the condition.

Surgery or an injury to the nose can both cause damage and swelling to the nasal valve, and scar tissue formed can weaken the structure. A deviated septum caused by trauma (injury) to the nose can often lead to NVC.

The nasal valve can be damaged by using drugs that are inhaled through the nose, like cocaine, over an extended time.

Nasal valve collapse can occur in people due to inherited anatomical characteristics or other congenital conditions. Someone may have been born with a nose that projects too far or nostrils that are too narrow.

Aging is also a factor in the condition because the aging process can naturally weaken the structures of the nasal valve.

There is a simple way you can test yourself to see if you have any degree of nasal valve collapse. It’s called the Cottle test and to perform this test, first breathe in and out somewhat deeply (but not too forced) through your nose. Then, hold the skin of your face on each side of your nose and then pull the skin outwards to each side. Breathe in again through your nose as you did before. If you can breathe more easily, then you have a degree of nasal valve collapse restricting your breathing. For some the amount may be inconsequential but others may find the amount significant.

Treatment options vary depending on the severity of the condition.

Make an appointment for an evaluation

If you feel you have a problem with nasal valve collapse, please make an appointment with Dr. Shvidler for an evaluation. He will discuss your diagnosis with you, as well as treatments which might work best for you. Soon you will begin your journey towards restoring your breathing back to normal.